A catalytic converter is important for your vehicle as it converts pollutants (such as carbon monoxide, hydrocarbons, nitrogen oxides, and other exhaust engine emissions ) that are toxic into lesser harmful exhaust gases through vehicle emission control.

The converter does this by catalyzing a redox reaction to lessen the toxic pollutants in these gases.

This converter is mostly used in internal combustion engines, which are fueled, by diesel, petrol, or gasoline.

The only thing is three-way catalyst converters need regular cleaning and maintenance so that they can perform at a high level.

You should keep them clean so that they can work more efficiently and increase their shelf life.

As such there are three different methods recommended to clean the converter from the core.

The initial stage of cleaning the converter is to remove the core from it.

It is very simple as you just have to loosen the retaining clamps and bolts that are at the end of the flanges.

Few converters do not have bolts because of their small diameter. They can be removed from the exhaust system easily.

While removing a bigger converter is careful, that gasket is not damaged. If it is damaged, then it might be a big problem.

Once you have successfully removed the converter, you can choose any of the three methods to clean it.

The first method is to use compressed air.

It will remove light accumulation on the core of the converter.

A core generally has aches and related contaminants on it. Make use of a rubber-tipped air nozzle and target the airflow on the outlet and inlet faces of the core.

While performing cleaning it is suggested to wear a dust earmark or respirator of high quality. Initial target at the outlet area and compress the air in each cell.

After cleaning of outlet, focus on the inlet and clean in a similar way.

If the core of the catalytic converter is not clean after the first process, then keep repeating the procedure. If needed, you can make use of a steam cleaner as a substitute for the air compressor.

This method is for heavy accumulation of carbon.

In this method, you will need to remove the core of the converter and place it in the oven.

It is best to use a heat-treating or ceramic oven. And the oven should be capable of achieving a 1050 °F temperature for almost 2 to 3 hours to burn the carbon.

Remember, not to exceed the recommended temperature and the time, strictly follow the instruction to be safe and secure.

For better results spray some oven cleaner through the cat and let it sit for a few minutes before you place it in an oven.

The third method is to soak the core of the catalyst converters in a solution of State 999 or Super Concentrated Gunk detergent.

You can even soak and clean it in a bath with water and lacquer thinner.

Keep the core in the solution for about one hour so that heavy accumulation on it can be removed easily.

After removing the core from the solution, blow-dry it.

Repeat the procedure if you need to get it cleaned further. Once the core is clean, attach it to the converter.

It is recommended to install a new gasket if needed or reuse the existing one.

How to Unclog Catalytic Converter Without Removing It?

Cleaning and unclogging the catalytic converter without removing isn’t very tough if you want to do it on your own.

Just make sure you check and listen for any loose parts inside and confirm whether the car is burning the oil properly.

If you can hear the loose parts removing and inspecting the catalytic converter is important because the loose parts get even looser and clog your exhaust pipe. If that happens your vehicle might stop completely.

After you have inspected it carefully, follow these steps…

Step 1. Get the catalytic converter cleaner

OXICAT Oxygen Sensor & Catalytic Converter Cleaner is what I have used before.

Since it worked great for me, I can recommend this to anyone who needs to unclog the catalytic converter without removing it.

Step 2. Pour the cleaner into the fuel tank

You just need to pour OXICAT cleaner into your fuel tank.

Refer to the product manual and add the exact amount mentioned.

Doesn’t matter if it’s petrol, diesel, or hybrid car, the cleaner will automatically help to clean the catalytic converter along with your O2 sensors and the whole exhaust system.

Step 3. Test your car by taking it for a short drive

Once you have cleaned the clogged catalytic converter, take your car for a short drive to see if it runs better.

Do not shy away from testing the engine by driving at high RPMs over 3000 for a long distance.

This will help in getting the catalytic converter really hot which will then burn out the clog inside it.

While doing so, keep a check on the coolant temperature to make sure that you do not overheat your car.

How long do catalytic converters last?

Catalytic converters are an important part of a vehicle’s emissions control system, and as such, they are required by law in many countries.

That said, their lifespan can vary depending on a number of factors. In general, though, most catalytic converters will last for the lifetime of a vehicle.

There are a few things that can shorten the lifespan of a catalytic converter, though. One is exposure to certain chemicals, either from the environment or from the engine.

Fuel additives, for example, can cause damage to the converters. Additionally, if an engine is running too hot, it can damage the converter.

Is it worth fixing a catalytic converter?

That depends on a number of factors. In some cases, it may be possible to clean or repair a catalytic converter rather than replace it, which can save you money.

However, if the converter is damaged beyond repair or if it needs to be replaced due to a failed emissions test, then the cost of replacement will need to be considered.

Additionally, the cost of replacement will vary depending on the make and model of your vehicle.

How much does it cost to replace a catalytic converter?

The cost of replacing a catalytic converter will vary depending on the make and model of your vehicle.

In general, though, you can expect to pay between $500 and $2000 for a new converter. Plus, the cost of labor will need to be considered.

If you are considering replacing your catalytic converter, it is important to consult with a qualified mechanic to get an accurate estimate of the cost.

Additionally, you should check with your local laws to see if there are any regulations regarding the replacement of catalytic converters.

Removing the old clogged catalytic converter for cleaning is often very easy on most cars. All you will need to loosen out the rusty bolts.

If, however, the catalytic converter in your car is installed directly on the turbocharger (which might be the case in some car models) the removal may become difficult.

If you think that your catalytic converter is clogged slightly, products such as Oxicat cleaner works pretty well.

It may save you some money and the best part is you can do all the cleaning without removing the catalytic converter.

In case your catalytic converter is still causing the problems, it’s best to take it to the mechanic to get it checked and replaced.

Other Related Posts:
How Much Does it Cost to Paint a Car Door – Estimates & Tips The cost of painting a car’s door depends on various things like DIY painting (do it yourself), where it will Read more

How To Get Mothball Smell Out of Car and Camper? How to DIY Fix a Leaking Radiator? 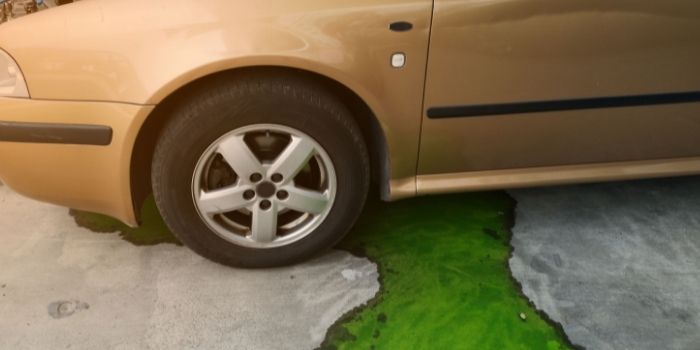 Do you have a dripping radiator? So, let's dig beneath the hood and repair it. In this post, I'll teach Read more

How to Get Rid of Fish Smells in the Car? The awful smell, like a rotting fish, in your car can be hard to tolerate. And the worst thing is Read more